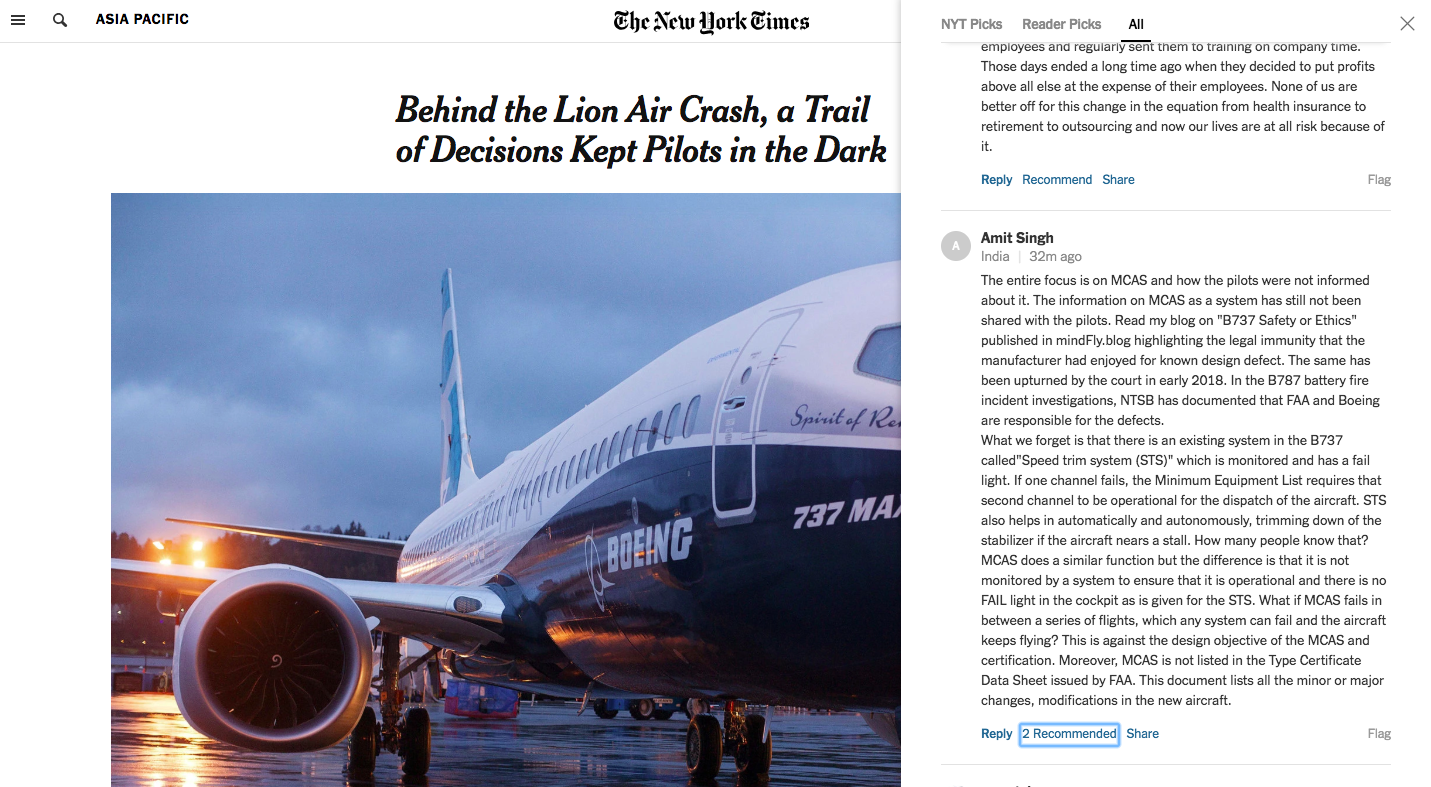 The comment as posted in the NY Times on 04th Feb 2019.The entire focus of the media and public is on MCAS and how the pilots were not informed about it. The information on MCAS as a system has still not been shared with the pilots. How can we be so sure that the MCAS is installed on the Max?

Read my blog on “B737 Safety or Ethics” published in mindFly blog “Safety or Ethics”  highlighting the legal immunity that the manufacturer had enjoyed for known design defect. The same has been upturned by the court in early 2018. In the B787 battery fire incident investigations, NTSB has documented that FAA and Boeing are responsible for the defects. Design flaws led to the Battery fires: Reuters report.

What we forget is that there is an existing system in the B737 called”Speed trim system (STS)” which is monitored and has a fail light.

If one channel fails, the Minimum Equipment List requires that second channel to be operational for the dispatch of the aircraft. STS also helps in automatically and autonomously, trimming down of the stabilizer if the aircraft nears a stall. How many people know that?

MCAS does a similar function but the difference is that it is not monitored by a system to ensure that it is operational and there is no FAIL light in the cockpit as is given for the STS.

The question rises,assuming the Max is equipped with the MCAS, what if MCAS fails in between a series of flights, which any bimodal system can fail and the aircraft keeps flying? Serviceability of MCAS would not be known to the crew since the system is not monitored and there is no feedback in the cockpit.This is against the design objective of the MCAS and certification.

MCAS is not listed in the Type Certificate Data Sheet issued by FAA. This document lists all the minor or major changes, modifications in the new aircraft. The much hyped MCAS is not listed in the TCDS, does it mean that it is not installed? Else the other possibility is that the MCAS was installed but the FAA was not notified. There has not been an official comment from Boeing or FAA regarding the presence of a component called MCAS.

At the end, its a collective responsibility of the OEM and the regulator to ensure that the commercial aspects of production do not outweigh the safety aspects of Protection. The Boeing company has been plagued with an ethical issue of not erring on the side of safety but working towards protecting the corporate bottom line.