A virtual reality-based flight simulator may provide the solution to the helicopter industry for pilot training and other safety aspects. EASA has approved the first virtual reality based flight simulation device.
“This is a significant milestone in the evolution of Flight Simulation Training Devices,” said Jesper Rasmussen, EASA Flight Standards Director. “The Agency is pursuing the modernization of its regulation for training devices to reflect their actual capability and technology advancement. This evolution will make a wider range of cost-effective training devices available to complement Full Flight Simulators and is being driven in part by training needs for new Vertical Take Off & Landing (VTOL) aircraft.

The Robinson helicopters have been notorious worldwide with the R44 model accounting for 1.6 accident per 1000,000 hrs. Robinson Helicopter Company began in 1973 as a helicopter manufacturing company, based in Southern California, which produces the R22, a two-seater model, and the R44, a four-seater model. In 2010, the Federal Aviation Administration certified the company’s newest model, the R66, a turbine-powered model, and since that time more than 800 R66 helicopters have been sold. In the past four decades, the company has built more than 12,000 helicopters.

In total, there have been at least 1,577 accidents or incidents involving Robinson Helicopter aircraft, 394 of them fatal accidents resulting in 703 deaths.

In a blog, the Aircraft Owners & Pilot Association writes about the good, bad and ugly aspects of the R22. The Good being that the R22 is hands-down the world’s leader in civil helicopter training. It is like the Cessna 152 of the fixed-wing world. The helicopter is reliable, cost effective and safe if operated within its guidelines. However, the R22 demands respect and regardless of the pilots experience is unforgiving during engine failure & other emergency requiring autorotation.
The Ugly is if you are not diligent, do not get the helicopter into an autorotation in the small window, and the rotor RPM get below about 75 percent you may never get it back. So it essential to just get the helicopter into autorotation and maintain RPM, deal with airspeed, and find a suitable place next. Stored energy in altitude is your best friend; continuous low operation is not a good idea. There are other problems, such as the rapid rollover rate if you stick a skid, and the helicopter can be very unforgiving.

The suitability of the VR concept was verified through a training evaluation program involving pilots from industry and aviation authorities, including helicopter flight instructors and test pilots. This evaluation confirmed the suitability of the VR concept for training purposes, particularly for cases such as autorotation, hovering and slope landing where exact height perception and wide field of view are required.

The device, for rotorcraft pilots, enhances safety by opening up the possibility of practising risky manoeuvres in a virtual environment. This addresses a key risk area in rotorcraft operations, where statistics show that around 20% of accidents occur during training flights. The device was developed and built by VRM Switzerland (VRMotion Ltd.

Helicopter flying involves its challenges and there is a need for a training device to practice abnormal and emergency procedures. India must utilize such training devices for helicopter to curb the accident rates amongst helicopters which is almost over 2 accidents per year. 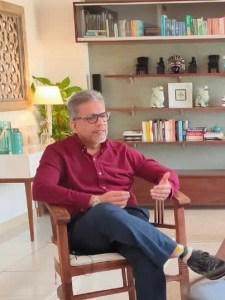