The 36th International Civil Aviation Organisation (ICAO) Assembly in 2007 passed a resolution encouraging States to implement approach procedures with vertical guidance (BaroVNAV and/or SBAS) for all instrument runway ends, either as the primary approach or as a back-up for precision approaches by 2016. This resolution was reiterated at the 37th Assembly in 2010, where RNAV (GNSS) NPA was also recognised as an acceptable alternative where approach procedure with vertical guidance (APV) cannot be implemented.

With regional connectivity increasing rapidly, airports need to have infrastructure like instrument landing systems(ILS) which allow aircrafts to land safely even in low visibility. It is a capital intensive and arduous task to install and maintain the ILS.

GAGAN will give the freedom to the operators of airport and airlines from the installation and maintenance of the expensive system at each airport. The satellite system signals will be increased in accuracy and received by the aircraft receivers to direct them towards the landing zone of the runway maintaining the same level of safety as with the ILS. A common equipment shared by all. 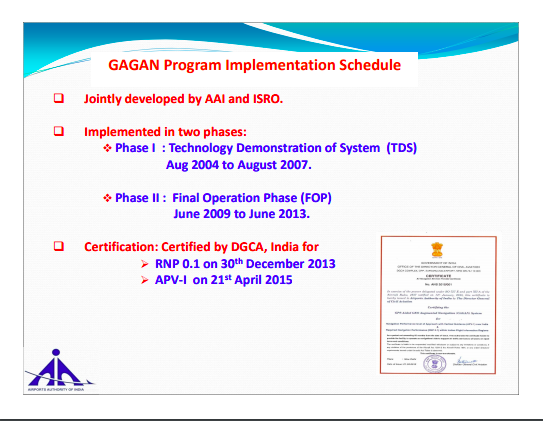 Government of India in the national civil aviation policy mandated that all aircraft registered in India after 01 jan 2019 will be GAGAN enabled. DGCA issued a public notice to this effect.

Unfortunately, since the airlines were not able to comply with this mandate and the DGCA under a public notice moved the date to 30th June 2020.

In simple terms the $110 million investment has been in space for the past 06 years without the aviation industry for which it was developed being able to utilize it.

The Airport authority of India presentation to ICAO on GAGAN

There are two elements of an approach to a runway that an aircraft flies. The lateral element which aligns the aircraft with the runway centerline and a vertical element which allows a safe descent guidance to aim a landing at the runway threshold.A large proportion of controlled flight into terrain (CFIT) accidents occur in the final approach segment of non precision approach (NPA) which does not have the vertical guidance element. There are several improvements that can be made to conventional NPA procedures: The lateral RNAV (LNAV) capability already improves flight crew situational awareness. The Dive & Drive descent technique, which is prone to error, should now rarely be used. Operators are expected to fly NPA using the Continuous Descent Final Approach (CDFA) technique where a continuous descent is maintained along a vertical path. This can be based on a manual calculation of the required rate of descent or it can make use of the vertical navigation (VNAV) function available on many aircraft. Procedures design criteria have been developed that take into account the onboard VNAV capabilities. RNAV approaches designed to make use of both lateral and vertical guidance are referred to as Approach Procedures with Vertical guidance (APV).

The Indian Space Research Organization (ISRO) and Airports Authority of India (AAI) have implemented the GPS Aided Geo Augmented Navigation-GAGAN project as a Satellite Based Augmentation System (SBAS) for the Indian Airspace. The objective of GAGAN to establish, deploy and certify satellite based augmentation system for safety-of-life civil aviation applications in India has been successfully completed. The system is inter-operable with other international SBAS systems like US-WAAS, European EGNOS, and Japanese MSAS etc. GAGAN GEO footprint extends from Africa to Australia and has expansion capability for seamless navigation services across the region. GAGAN provides the additional accuracy, availability, and integrity necessary for all phases of flight, from enroute through approach for all qualified airports within the GAGAN service volume. GAGAN Payload is already operational through GSAT-8 and GSAT-10 satellites. The third GAGAN payload will be carried onboard GSAT-15 satellite which is scheduled for launch this year.

Initially, Director General of Civil Aviation (DGCA) certified GAGAN for enroute operations (RNP 0.1) on December 30, 2013 and subsequently on April 21, 2015 for precision approach services (APV 1). APV1 Certified GAGAN signals are being broadcast with effect from May 19, 2015. GAGAN is the first SBAS system in the world to serve the equatorial region. GAGAN ionospheric algorithm known as ISRO GIVE Model-Multi-Layer Data Fusion (IGM-MLDF) was developed by ISRO and is operational in the implemented GAGAN System. India has become the third country in the world to have such precision approach capabilities.

While GAGAN will redefine navigation over Indian Airspace. Safety levels during approaches will enhanced with the capability of GAGAN to provide vertical navigation signals. All runways in India can be serviced with this facility, thereby enhancing access even in poor weather conditions. Airspace can be better managed with shorter routes flown with the satellite guidance systems.