In 2013,as the Head of Flight Operations of Air Asia India, I had sent a proposal that all the pilots of Air Asia group must be trained on Upset recovery (UPRT). The Group COO saw it as an additional expenditure and deferred it. After the ill-fated accident,as the Designate Head of Safety of Air Asia group, I told the Group CEO in a safety meeting that the probable cause of the accident was high altitude upset but my views were dismissed as too premature to reach any conclusion. This accident investigation report echo’s my line of thinking.

The final accident report of the Air Asia flight QZ-8501 which crashed on its flight from Indonesia to Singapore in Dec 2014, killing all 162 occupants, has been released. It is an exhaustive report and a lot of effort may have been put in to explain the circumstances in detail.

Through mindFly I would like to give my synopsis of the accident which the report has not elaborated. I will also list similar accidents and the concept which is common to all those accidents.

A Boeing 707 crashed on a demonstration and acceptance flight in 1959. The aircraft was flown by a test pilots and a trainee when one of the maneuvers called the “Dutch Roll” went out of control and crashed in a river near Washington. The test pilot was demonstrating and teaching the training dutch roll recovery when the roll increased to almost 60 degrees. The pilots gave aileron inputs in the direction of the roll and against when the maneuver became violent resulting in three of the four engines separated and the remaining was on fire. This increased instability and the aircraft struck trees and crashed short of the landing area while attempting to land with the remaining engine also shut down to keep the wings level.

The oscillatory motion following heavily damped roll subsidence mode is the lateral-directional oscillatory motion known as Dutch roll. In simple words, it is the combination of continuous yawing and rolling oscillation. The origin of its name is believed to come from the motion of a classic Dutch skating technique. This mode of motion was described by G.H. Bryan in 1911, and later by 1916 was being called the “Dutch roll.” In many aircraft, it happens naturally (due to its directional stability), while in some it may happen accidentally. One of the reasons of the Dutch Roll is pilot induced to to use of excessive flight control inputs. 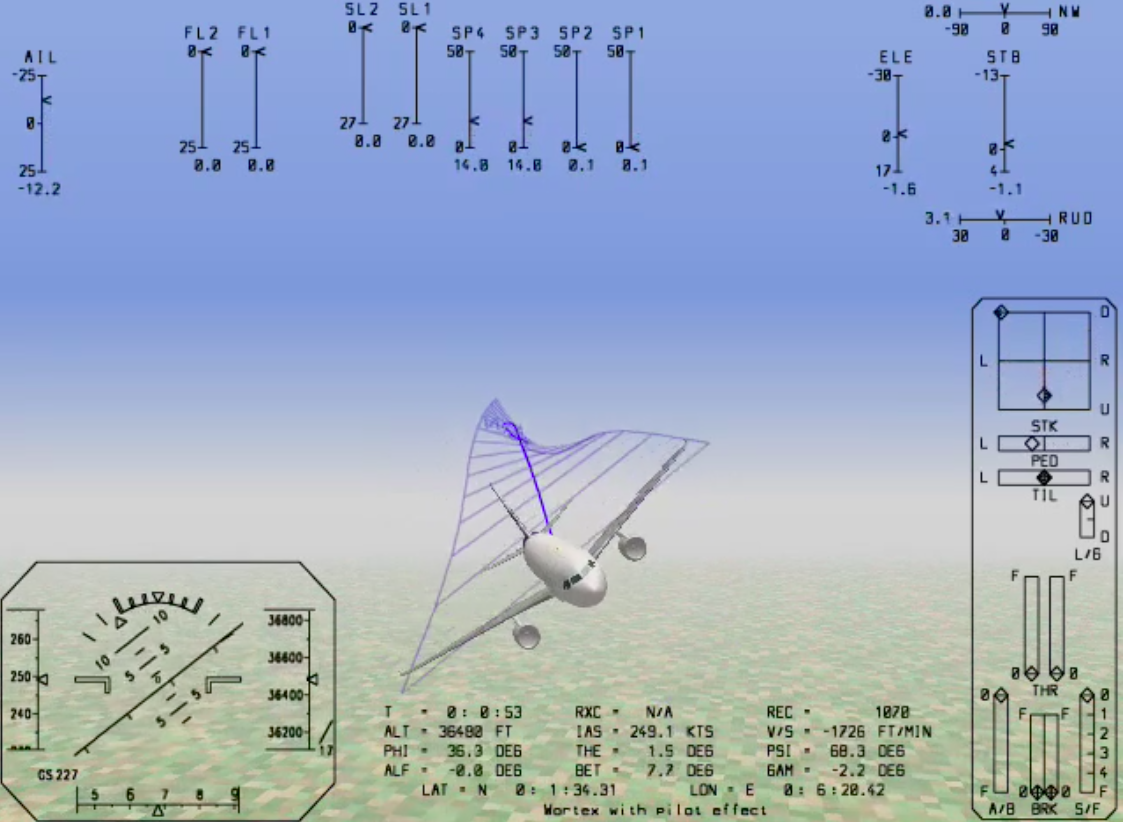 Watch a video showing the effect of over controlling the aircraft that has been upset by turbulence.

The AirAsia accident is characterized by the onset of Dutch Roll due to a sudden rudder deflection caused by electrical supply interruption to the Flight Augmentation Computers (FAC) by pulling the circuit breakers. The rudder deflection of 2 degrees led to a gradual roll at the rate of 6 degrees per second but the aircraft bank reached a maximum of 54 degrees which is outside the normal operating envelope of bank. There were vigorous inputs from the pilot flying to correct the bank but he couldn’t dampen the roll. There was a simultaneous pitch up of the aircraft due to pilot input and stall warnings triggered as the angle of attack reached 40 degrees. The oscillations caused the maximum roll to reach 104 degrees as the aircraft climbed from 32000feet to 38,500 feet and thereafter descended at the rate of 20,000 feet/minute.

The Air France AF447 accident accident in June 2009 had a similar trajectory. The pilot flying entered into an oscillation and the aircraft began to climb before stalling.

Note, the roll oscillations and pitch-up is similar in both the accidents.

Modern jet aircrafts fly at high altitudes. While aerodynamic principles and certain hazards apply at all altitudes, they become particularly significant with respect to loss of control (or upset) at altitudes above FL250.Aerodynamic characteristics of lifting surfaces and airplanes are significantly affected by the relationship of airspeed to Mach. At high altitudes, high Mach numbers exist at relatively low calibrated airspeeds.

At a constant airspeed (Vc), elevator deflection at 35,000 ft will result in a higher pitch rate than the same elevator deflection at 5,000 ft because there is less aerodynamic damping. Therefore, the change in angle of attack is greater, creating more lift and a higher load factor. If the control system is designed to provide a fixed ratio of control force to elevator deflection, it will take less force to generate the same load factor as altitude increases For a given pitch attitude, the change in rate of climb or descent is proportional to the true airspeed.

A pitch attitude at 290 kt EAS at sea level that results in 500 ft per minute (fpm) will generate about 900 fpm at 35,000 ft (290 kt EAS at 35,000 ft is approximatively 490 kt TAS). This characteristic is true even for small attitude changes, such as used to hold altitude. It is also why smooth and small control inputs are required at high altitude, particularly when disconnecting the autopilot.

As mentioned above, altitude and Mach number change the aerodynamic characteristics of the airplane – so it does “feel” and respond differently at different altitudes. It is imperative to not over- react with large and abrupt inputs.

Even though the final report of the Air Asia flight QZ8501 has tried to highlight very important aspects of the flight, the findings do not justify the pertinent root causes.

Safety and Quality always pay in the long run. There are not cost centre but they are cost savers.